A Journey of Learning Code

This year brings about a new class with a new lecturer, James Cooper, and it’s all about looking into future technologies of the gaming/VFX industries. I’m sure this will be a really interesting group of lessons to cover, especially since we’ve been tasked with writing a 2000-word essay about a topic of our choice. All we had to do was pick a topic from the plethora out there, put it would be good to pick something closer to what we plan on focusing on this year. With that in mind, I thought I’d write about something to do with programming.

I’d been hearing about D language for a little while now, especially after watching the DConf 2016 presentation by Remedy Entertainment. They’re the first company to make a AAA game (Quantum Break) using Dlang – they didn’t solely use the language, but managed to integrate it into their already well-established C++ structure. It’s a short enough presentation at roughly 50 minutes, but it’s definitely worth a watch to see what Ethan Watcon (senior generalist programmer at Remedy) thinks about the use of Dlang and where it can go in the future.

Aside from Remedy using the language in their game, there are a number of other big-name companies that use it for their business. None of them are gaming companies, but it does just show how far D has come as a coding option of choice; we might be seeing it be used in further AAA games as it continues to gain a foothold or it might have already seen its peak in the gaming industry and won’t be seen again for a long while.

That brings me to my actual essay subject, which might be more technical than I originally intended, but I do like the topic a lot. I came up with a long topic and then brought it down to a more concise version:

Video game programming languages have been evolving rapidly since the first implementation of the C language in 1973. One of the latest C derivatives is called the D language and so far has not seen wide-spread use in the industry. However, will it become the next big language for large scale video game development?

D language is one of the latest C derivatives in programming. Could it be favoured as the next big language of choice in video game development?

I’ve got a couple of web pages that’ll prove useful while researching this topic to write out my argument (either for or against, that remains to be seen in the essay!).

I even managed to find some of the statistics from the 2016 conference website about the daily downloads since about January 2013: 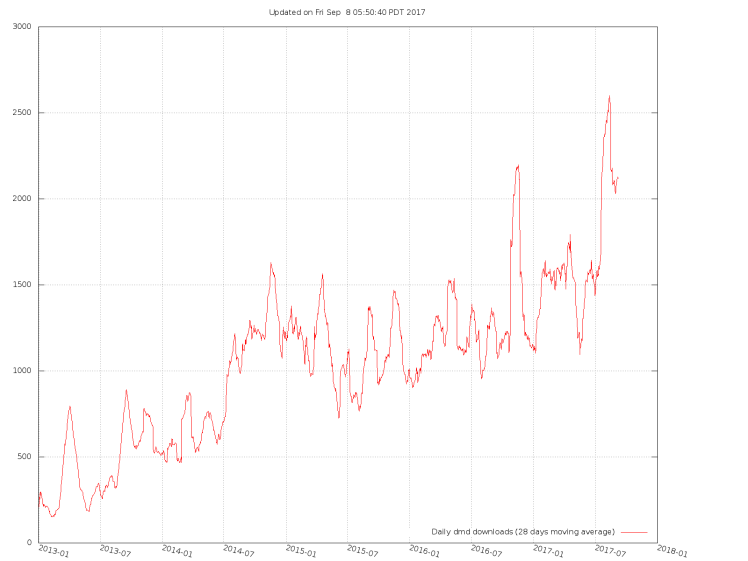 Unfortunately, there would be no way to interpret how the code is being used (whether for video game development or for other purpose), so I likely wouldn’t be able to use it for my more specific essay topic. I’m looking forward to continuing my research, begin building my full argument into an essay, and I’ll probably write another blog post mid-way through the writing process.